Instead of fixing its mess, Tennessee Valley Authority has chosen to fight years-long legal battles and withhold critical information.

We all know the story. On Dec. 22, 2008, a dike at the Tennessee Valley Authority’s coal-fired power plant failed and more than a billion gallons of toxic waste covered the surrounding area.

Over 10 years later, TVA is still cleaning up that mess – with ratepayer dollars – and is still dealing with both remediation of the site and its alleged liability in the sickness and death of the cleanup workers.

But let’s go back in time for a minute to before the Kingston disaster.

Coal ash is the waste from coal plants like the eight scattered across Tennessee. What happens to that coal ash? In many places, it was (or is) dumped right on the ground. One of the impacts of coal ash is that it slowly leaches toxins like arsenic, mercury and lead into groundwater.

Nine out of 10 coal plants are polluting groundwater 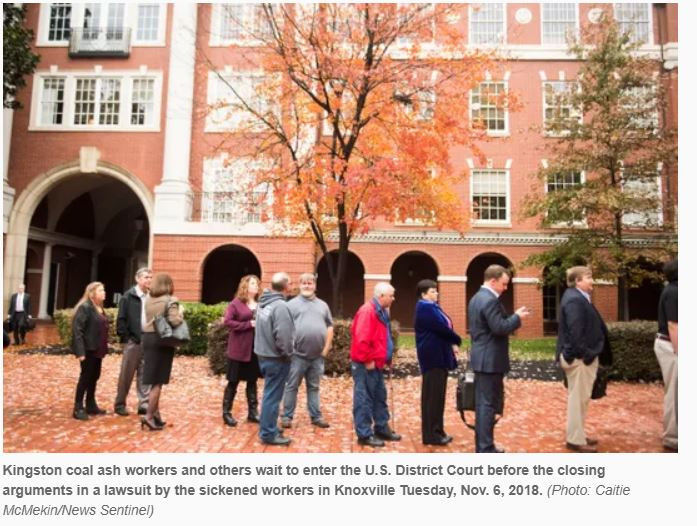 Kingston coal ash workers and others wait to enter the U.S. District Court before the closing arguments in a lawsuit by the sickened workers in Knoxville Tuesday, Nov. 6, 2018. (Photo: Caitie McMekin/News Sentinel)

TVA knew for decades that one of the side effects of its coal ash was pollution of groundwater, but it was only when the public started asking questions that the issue came to light. How much coal ash is being stored at these facilities? How is it being stored? Is it secure? Did you line the pits or ponds into which you dumped billions of tons of toxic sludge?

One would think that TVA – a government agency – would not only have answered those questions but would have fixed the problem by now. One would be wrong.

That’s where oversight comes in. Public oversight of government is critical.

After decades of environmental groups screaming at the top of their lungs for TVA or the Environmental Protection Agency to do something about coal ash contamination, a federal rule was published in 2015 that required – among other things – coal-fired power plants to disclose their groundwater sampling data.

That data started rolling in three years later – in March 2018 – and the Environmental Integrity Project began to compile just the groundwater sampling data for analysis. Recently, the public found out that nine out of 10 coal-fired plants across the nation were polluting groundwater, notably the Allen Fossil Plant in Memphis, where arsenic was found at 350 times the acceptable limit.

Without aggressive oversight of the government, we would not have known.

TVA should fix the mess, rather than keep up the fight against transparency

For years, environmental groups had to fight for information, write letter after letter, issue complaints, file Freedom of Information Act requests and even sue to try to get answers. Even with the incomplete information now available, it is clear that coal ash is polluting our groundwater at the very least.

There are remedies. Excavate the coal ash. Recycle it. A significant amount of coal ash can be recycled into safe construction materials like concrete and drywall. Move the non-recyclable ash into lined, contained structures away from rivers and lakes where it cannot continue to pollute our groundwater or cause other problems for Tennesseans.

These remedies are not as expensive or complicated as some claim, and they are well within the understanding and capability of TVA. But instead of fixing its mess, TVA has chosen to fight years-long legal battles and withhold critical information.

Tennesseans deserve answers, and the struggle to get critical information from TVA is real. Without groups like Tennessee Clean Water Network–and dozens of others throughout the state–fighting for information, the public might still be in the dark.

In an ideal world, government oversight would not be necessary. In ours, it’s essential.

Fish migrate, too! Until they hit a wall.

Can't You Smell that Smell?